Shimano Epic Enduro with BikeVillage in the French Alps 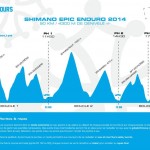 I think they call that a paradigm shift.

Pretty much every point of reference I had for what makes up a savage bike event changed at the weekend when a friend and I drove way down south into the Languedoc for the inaugural Shimano Epic Enduro.

The stats already sounded pretty intimidating – 90km of riding with 4300m of climbing (Magic Carpet from the house, twice) with a lot of carrying and tough terrain everywhere.

There were 8 timed special stages and it started at 5am, in the dark, to give everyone 16 hours until it got dark again to get around. All 550 racers who signed up and turned up thought they were up to it. Less than half of them were right.

To put the technical difficulty of the trails into perspective, if we were to race Sketchy Dismount top to bottom on one go, well that would have probably made the third easiest of the eight stages, after the two night time ones.

By the time we sneaked our way through the last time barrier with just 7 minutes to spare, after 12 hours of solid riding, the sound of ambulances at the bottom of specials was an all too familiar backdrop to the suffer-fest we found ourselves in.

But isn’t it often the way – the deeper the troughs the higher the peaks (this one works on many levels in this case). We both finished, in just under 14 hours total riding, having stuck together all day.

I doubt either of us would have finished if we hadn’t ridden it as a team. At least six of the eight specials were the most intense and the most intensely amazing riding I’ve ever had the good fortune to do.

How good? Neck hair standing on end 48 hours later as I write this good.

Racers spontaneously hugging at the bottom of stages good.

Me planning a couple of BikeVillage trips down that way next year good… watch this space!!

Here’s a wee video of Stage 4 , one of the easiest ones, to give you a taste.