About Team BikeVillage in the French Alps

BikeVillage is brought to you by Sam, Lyndsey, Addie, Rowan and Théa. 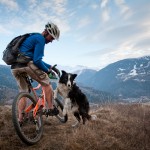 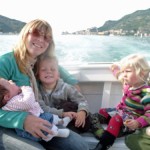 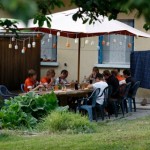 Sam has been riding in the valley all year for 17 years (he guides fat biking rides on the snow through the winter), clocking up several million vertical metres of singletrack, so knows more sweet trails than you could shake a stick at.

Sam is also currently the president of the European Organisation of MTB Instructor-Guides, whose main project is the creation of a standardised European MTB Guide training scheme.

So when you wonder what he does in winter, a big part of the answer might be less exciting than you were expecting!

Lyndsey is the one who keeps the good ship BikeVillage afloat.

Whilst she has reluctantly hung up her chef’s hat (dinner is served at exactly the same time as three reassuringly delinquent BV kids go to bed next door) she still personally sculpts every new chef into the very image of herself in the kitchen and when you email us, it’s her name you’ll see at the bottom of the reply.

In her ‘spare’ time she’s an English teacher, helping local French children and adults to speak English with a comedy Edinburgh twang!

Bringing up the rear are Addie, Rowan and Théa, our kids.

How did you guys get started?

A brief history of BikeVillage – 17 years and counting!

Bikes have gotten so much better since we set up all those years ago! Here’s a quick run through of Sam’s steeds since the beginning:

1993-2006 Litespeed Obed Ti Frame
eventually topping out with some SID XCs with 80mm travel… If I was a Viking this is the bike I’d be buried with.

2006-2008
Rocky Mountain Blizzard with Pikes upfront. A ground breaking ‘hardcore’ hardtail at the time. Snapped the frame and the warranty replacement was wrong size so sold it to a man trying to break the round the world biking record.

Nicknamed the Golden Shower, it was a marvel of teutonic engineering, but not aesthetics… Still, the adjustable geometry was super-interesting to play around with. Sold in a bidding war between 2 men called Dieter on German e-bay.

2010 Ragley Mmmbop
Back to a hardtail and what a bike! It’s still kicking around as the pump-track bike. It feels way too small now but perfect for some laps in the garden. 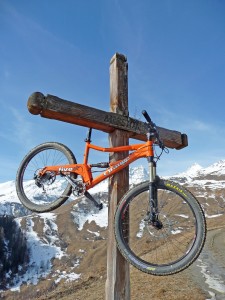 Such a fun bike, it’s ‘pop’ out of corners was addictive. I was gutted to sell it but at least it went to a happy BV guest!

Sensing that 26″ wheeled Fives were out of time (I was right, 650b version released 3 months later!) I tried to future proof myself with a Liteville 301 that takes 26″ or 650b wheels. Less lively than the Five but climbed better and descended very fast indeed. It’s also very light, running a niche as 1×10 set-up with a converted 11-40 cassette and a fat-thin chainring so no chain guide. For a year there I was ahead of the technology curve…

Having test ridden and loved another BV guide’s Five 29er, I was smitten. When Orange showcased their new Alpine Five build up at the Peebles Enduro World Series event, I sent one of those expensive emails… 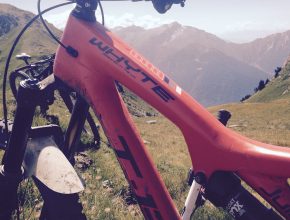 Whyte’s bikes were just too damn good to ignore so 2016 saw me hit the poppiest, most flickable and fun bike thus far built – the T130. Relatively modest in travel but punching well above its weight in geometry, the T-130 and its big brother the G-160 are perfect alpine trail bikes.